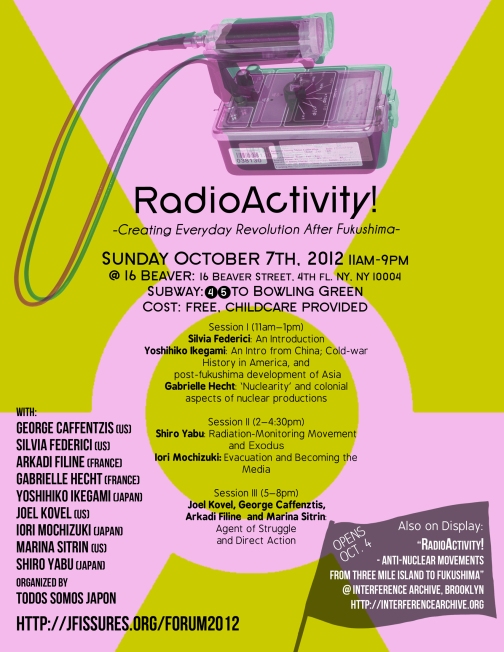 Where we are at today after Fukushima in the struggles against nuclear power – that is the question.

As news from Japan slowly reveal the truth about the worst nuclear disaster to date, people today continue to live under the threat of radioactive contamination. Amidst an unprecedented crisis, neglected by the government, they have engaged in massive protests and various forms of resistance – from street demonstrations to the monitoring of radiation in public parks and in baby formulas – making radiation visible. In this way, the Fukushima crisis is certainly changing the map of anti-nuclear struggle.

Stories coming from the Nigerien uranium mines clarify the nature of the nuclear cycle; they show how ‘nuclear’ is actually a form of global power and colonialism. The history of anti-nuke resistance in the US – where it all began- illuminates our possibilities and also the difficulties in the way of our ending nuclear power. Recently, we have learned from the experience of CASTOR –a blockade formed against the transport of a nuclear waste from Germany to France.

By examining these different forms of resistance and the new challenge that reproductive labor faces in Japan, we aim to link global struggles and think together how we can together tackle this planetary crisis.

An Intro from China; Cold-war History in America, and post-fukushima development of Asia: with Yoshihiko Ikegami (skype)

Radiation-Monitoring Movement and Exodus: with Shiro Yabu
Evacuation and Becoming the Media: with Iori Mochizuki

George Caffentzis is a Professor of Philosophy at the University of Southern Maine. He is co-founder of the Midnight Notes Collective and the Committee for Academic Freedom in Africa. He is the author and co-author of many articles and books including Midnight Oil: Work, Energy, War 1973-1992.

Silvia Federici is a feminist writer, teacher, and militant. She has been a member of Committee for Academic Freedom in Africa and Midnight Notes Collective, author of Caliban and the Witch: Women, the Body and Primitive Accumulation. and a new book: Revolution at Point Zero: Housework, Reproduction, and Feminist Struggle.

Arkadi Filine is an alias of three individuals who signed the book Forget Fukushima published in April 2012 in France (Les éditions du bout de la ville). Neither heroes nor martyres, Arkadi Filine is one of the 800,000 ‘iquidators’ of Chernobyl. Svetlana Alexievitch offers testimonies in her book Voices from Chernobyl. Issues of ‘Chernobyl generation’  — the three authors seek to understand them in a sense of derision, on the edge of abyss, with a desperate yet unresigned attitude. The three authors had met around the anti-nuclear struggle in France during the 2000s, and since the catastrophe in Fukushima, have pursued a social criticism of nuclear power, from the angle of the social discipline and management that it implies.

Gabrielle Hecht is Associate Professor of History at the University of Michigan. She is the author of The Radiance of France: Nuclear Power and National Identity after World War II (1998), Being Nuclear (2012) and co-editor of Technologies of Power (2001).

Yoshihiko Ikegami is a former editor-in-chief of Gendaishiso (Contemporary Thoughts), a prominent political magazine in Japan. He has contributed numerous post-Fukushima thoughts and issues from Tokyo for jfissures.org as an author and an editor. Ikegami currently lives in Tianjin, China.

Joel Kovel remembers Hiroshima because he (9 years old at the time) was at summer camp that day, and the entire camp broke out in rapturous cheers to celebrate the greatness of the USA. A terrible moment, which he is still trying to come to terms with. Later on he became an anti-nuclear activist and, while working with the War Resisters League, played some role in planning the great anti-nuclear rallies of 1982. Following on that experience he wrote Against the State of Nuclear Terror, which was published in 1984 by South End Press. Recently, the primary focus of his work has been the development of Ecosocialism (see ecosocialisthorizons.com). The central idea is to regard the ecological crisis within a comprehensive anti-capitalist perspective. This meeting gives an opportunity to extend that analysis to the crisis posed by nuclear power and weaponry.

Iori Mochizuki writes for the Fukushima Diary blog (has approximately 10,000 access daily) to share on-the-ground information of what’s happening to the people in Japan since Fukushima. After March 11, 2011, frustrated with the lack of reliable information from official Japanese channels, he began posting stories he discovered on Facebook sites from his native Yokohama. Harassed and threatened by Japanese officials, repeated online DDoS attacks and sickened by radiation (diarrhea, headache, coughing, nasal congestion, fatigue, pain behind his eyes), Mochizuki left Japan in December, 2011. Since then, he has traveled extensively in France, Spain, The Netherlands, Romania, Austria and Tunisia. He currently lives in US.

Marina Sitrin is the author of Everyday Revolutions: Horizontalism and Autonomy in Argentina (2012), Occupying Language: The Secret Rendezvous with History and the Present (2012) and Horizontalism: Voices of Popular Power in Argentina (2006). She is a Postdoctoral Fellow at the Committee on Globalization and Social Change at the CUNY Graduate Center, and a participant in Occupy Wall Street.

Shiro Yabu has extensively written in various names since the 90’s, creating a new trend of thought in Japanese social movement. Since his graduation from high school, he has been developing his characteristic writing style while working as steeplejack, factory worker, book store clerk and bar tender. His publication includes “Nuclear City” (2010), “The 3.12 Ideas” (2012) and “Contemporary Thoughts of Love and Violence” (2006).

Todos Somos Japon is a NYC-based project of network building, of creating a current in and out of Japan, to support Japanese activists and movements and for a new association of the struggling people of the world.

This site uses Akismet to reduce spam. Learn how your comment data is processed.