Join us for an evening of film and post-screening discussion with local anti-nuke individuals and groups. Nuclear energy and its role in our society involves an enormous complexity, which prevents us from even simply acquiring basic knowledge like how nuclear power plants can be dangerous and how nuclear accident can affect our lives. We can begin thinking together and cultivate the power to oust the nuclearity. We will watch a critically-acclaimed documentary INTO ETERNITY. After the film, we will discuss the film, the current catastrophe, the history, the future, and the post-Fukushima movement which has also spread to NYC. Bring your questions and ideas to share.

Every day, the world over, large amounts of high-level radioactive waste created by nuclear power plants is placed in interim storages, which are vulnerable to natural disasters, man-made disasters, and to societal changes. In Finland the world’s first permanent repository is being hewn out of solid rock – a huge system of underground tunnels – that must last 100,000 years as this is how long the waste remains hazardous.

Once the waste has been deposited and the repository is full, the facility is to be sealed off and never opened again. Or so we hope, but can we ensure that? And how is it possible to warn our descendants of the deadly waste we left behind? How do we prevent them from thinking they have found the pyramids of our time, mystical burial grounds, hidden treasures? Which languages and signs will they understand? And if they understand, will they respect our instructions? While gigantic monster machines dig deeper and deeper into the dark, experts above ground strive to find solutions to this crucially important radioactive waste issue to secure mankind and all species on planet Earth now and in the near and very distant future.

Captivating, wondrous and extremely frightening, this feature documentary takes viewers on a journey never seen before into the underworld and into the future.

“Fukushima was not a natural disaster, but a result of human error and mental meltdown!” – Michael Madsen, Director of INTO ETERNITY 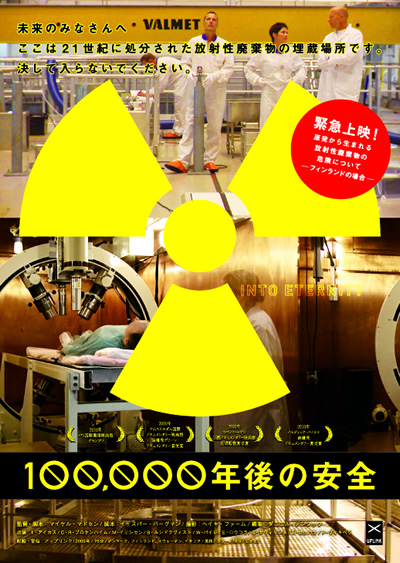 [Back to EVENT Page]

This site uses Akismet to reduce spam. Learn how your comment data is processed.